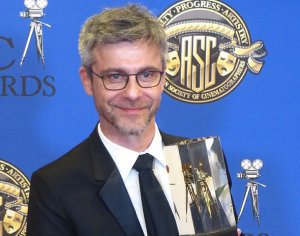 Born in Croatia, Vanja Černjul earned his first cinematography degree from the Academy of Dramatic Arts at the University of Zagreb in 1991. Graduation ceremonies coincided with the first political and military actions that triggered the Croatian War of Independence. Days after graduation, he pledged his skills to reporting the upheaval to the rest of the world and joined the ranks of international journalists providing combat footage for international news outlets like BBC, CNN and NBC. In 1995 Vanja moved to New York and enrolled in the MFA program of the Tisch Graduate School of the Arts at NYU.
He has since photographed 20 feature films, numerous hit television programs and countless other projects with a wide range of collaborators. Vanja Černjul&rsquo;s recent work includes HBO series The Deuce (David Simon, creator) and the Netflix original series Marco Polo (John Fusco, creator). His work on Marco Polo has been granted the ASC Award for cinematography in 2016.
Vanja is based in New York City.