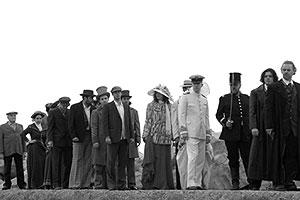 Director: There is an assumption that the movie was filmed by Trieste film pioneer  Salvatore Spina, who broadcasted movies and shoot throughout Austria-Hungary.

The film was screened in the cinema Minerva in Pula on December 1st 1909, and then was lost.

It is the first feature film shot in Croatia, and is inspired by the “Great Train Robbery” Edwin Stanton Porter, from 1903., and is characterized by first-realistic techniques in a feature film, which revolutionized the world cinema, providing it with personality and style.

The attack on the National Bank in Rijeka is an action silent piece of work which is the film’s canvas revived law robbery, and was recorded in accordance with then current realist film reconstruction.

The two young Russians attacked Rijeka National Bank, a branch at the Square Dante, killed branch manager and abducted about 50,000 crowns. Citizens ran after them and robbers opened fire with a revolver. First was defeated by the city guard Ratcovich, and the other robber fled to Zurich, where he was arrested and handed over to the Austro-Hungarian authorities. In Rijeka, one Russian was sentenced to life in prison and the other to fifteen years. 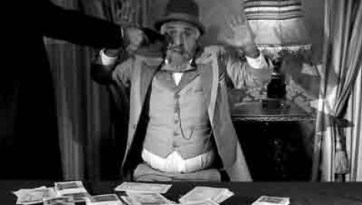 In memory of the hundredth anniversary of the film in Rijeka, director Mladen Juran and producer Boris Dmitrovic from the production company Formula movie Ltd. Zagreb, recorded a remake of the same name film in the form of a short film, whose premiere took place exactly on the first anniversary of Art-Cinema Croatia in Rijeka.

The film marks the black and white technique, static camera position without major and other plans, subtitles, improvised piano accompaniment … The basic idea is that the director of the remake, with all its author’s originality in reduced expression identifies with the director from 1909. Director of photography is Zeljko Saric, main role is played by Allen Liverić from HNK Ivana pl.Zajca and other roles are played by Rijeka actors Zdenko Botic, Jasmin Mekic, Denis Brižić, Balaz Anastasius-Lecic, Tanja Smoje, Damir Orlic, Damir Glavočić, Alojz Usenik, Nenad Vukelic and a dozen other actors. The film was supported by the Croatian Audiovisual Centre and the city of Rijeka.

Most of the scenes are filmed at the former Piazza Dante, once the site of the National Bank, and today’s Square Brigade 111, in front of the Governor’s Palace, and at the Rijeka breakwater.

It is a story about the futility of “capturing” the truth of the past. Time wall is an invincible obstacle. However, in the micro and macro scale of infinity it does not matter if something happened before or after. We dream stories that have happened, or will happen, or, simply, always happen … said a film director Mladen Juran.

Link to the clip of the film Mladen Juran, “The attack on the National Bank“ from 2009.