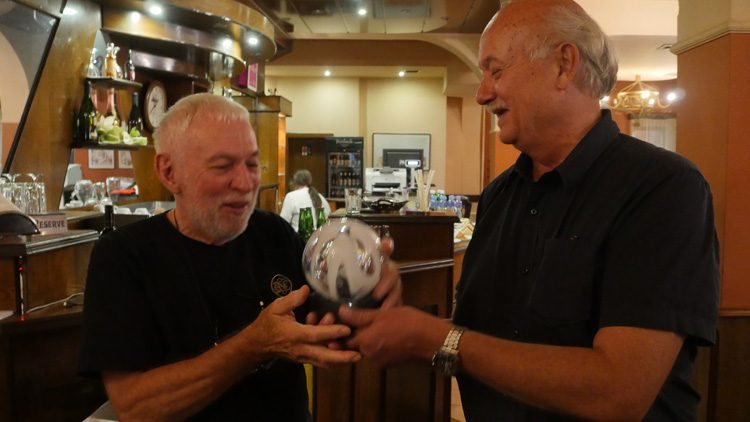 During the dinner offered by the Macedonian Society of Cinematographers to all IMAGO delegates a surprise aroused. The IMAGO president Paul René Roestad and General Secretary Louis Philippe Capelle announced Nigel Walters the former president as honorary member of IMAGO. In fact, there was no one who most deserved such a distinction at the moment. Nigel has been a great ambassador of IMAGO and its goals everywhere he goes. He has worked since he embraced the ideas and goals of the federation to make it well known and recognized around the world. Nigel became president in 2008 leaving in 2015 due the expiration time of mandate imposed by the statutes.

During the presidency of IMAGO apart from being a great ambassador of the IMAGO brand, Nigel put out a Balkan Conference to be held every year at the Manaki Film Festival. This is an initiative who Nigel is very proud of, putting together and sitting in the same table Balkan countries who some of them not long ago were at war in result of the brake of Yugoslavia.

During the period of Nigel’s IMAGO presidency, the associate members got the right to become full members with the same rights as any other society. Australia, Japan, New Zealand, Canada and Israel joined immediately the federation as full members as soon the bill was approved by the general assembly in Greece 2014. Also during this period 13 more societies joined the federation they were: Australia ACS, Bosnia Herzegovina ASBH, Canada CSC, New Zealand NZCS, Japan JSC, Israel ACT, Philippines FSC, Iran IRSC, Ireland ISC, Romania RSC, Serbia SAS, South Korea KSC and Turkey TSC. The German society BVK which had left the federation in result of the chaotic financial situation during the book severe crisis returned to IMAGO. On the other end it was unfortunate that the French AFC left the federation in disagreement with the politics followed with the expansion of the federation out of the European borders and with the policy followed for the website. During Nigel’s presidency the relationship with Camerimage was reestablished in full.

It was published 3 editions of the World Cinematographers Directory in close collaboration with the British Cinematographer magazine along with a section exclusively dedicated to IMAGO in every issue of the magazine. For the first time in the history of IMAGO the General Assembly was held out of Europe in Jerusalem in 2015 His efforts in defending and promoting the cinematographer and cinematography was well known all over the world spreading the name of IMAGO amongst fellow colleagues, companies, festivals and in many other events.

Nigel Walters has a great deal of responsible for the expansion and the growth of IMAGO during his presidency.